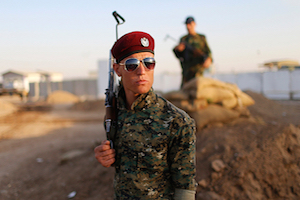 Social media continues to be a powerful tool of mass communication. It provides individuals with a platform to both collaborate with other people that share a similar interest, and raise awareness for various issues.

The Kurdish people are still finding their feet on social media — some of whom are trying to highlight growing internal disputes in Kurdistan region, shifting the focus away from the humanitarian crisis that parts of Kurdistan, such as the autonomous Kobane canton face. While others have been keen to adhere to a narrative that highlights Kurdish rights, urging politicians and news agencies to be responsible towards the Kurdish masses.

Nonetheless, while we should be actively pursuing discussions pertaining to Kurdistan, and strengthening democracy in the process, we should not lose sight of the bigger battle. While other ethic minorities or groups that are fighting for their rights have an expansive and substantial level of support, and perhaps even leverage in reporting, the Kurds do not.

The only way to tip the balance, is through pursuing means of correcting erroneous reports on Kurdish people. For instance, Turkish-owned outlets, and even some Arab news agencies such as Al Arabbiya have long attempted to reiterate claims of “ethnic cleansing” by Kurdish forces in Kobane, which are unsubstantiated, and at best slanderous.

In order to correct these reports, the most conventional and traditional methods is through contacting the relevant news agency, or alternatively the author. It is easy to tweet and Facebook about it, but going the extra step of communicating with the author is essential, if they prove to be respectful enough to engage with.

However, currently we are still stuck in the first phase, which is highlighting instances where Kurdish rights are violated, but increasingly we are not translating those transgressions against Human rights into actions. There are several reasons for this, namely the lack of lobby groups for Kurds internationally, and more importantly the lack of Human rights organisations that dedicate at least one department or section to the plight of Kurdish people.

Lobby groups in Europe that priorities Kurdish interests are scarce, and this is largely due to the lack of funding available for such groups. Kurdish interests, which do not hamper on the interests or Human rights of other groups will continue to be neglected until we establish monitoring groups that champion our rights.