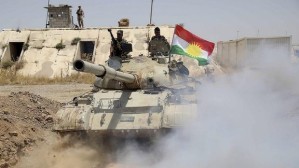 The plight of Ezidis were unknown to many in the world for decades. They have suffered 73 massacres throughout their history, a parliamentary Ezidi member explained to the Washington Post.

What is less known to the world is the discrimination they have faced regionally, often referred to as “devil-worshippers” and “heretical”. The level of discrimination and phobia has partially contributed to the group’s seclusion from the rest of Kurdish society. Unfortunately, little is written about their religious beliefs, often myths have been perpetuated unjustifiably.

Recently, I came across a video of what appears to be teenage girl from the Ezidi community, where she says, “If Peshmerga are Kurds, then I am not Kurdish”. Her words caused much controversy from several Facebook page(s). On one particular Kurdish page, the video received nearly 50,000 views, 4,000 likes, 400 shares and 1,400 comments.

Most of the comments were vile, some calling her a dog. Amidst some comments were voices of reason. The young girl was clearly venting out of anger, frustration and having witnessed her entire town massacred by ISIS while Kurdish Peshmerga forces battled (and initially, some fled) the notorious group.

There is no doubt that she is not the representative of the Ezidi community, but an individual whose anger supersedes her judgement. Similarly, her words can not be used to draw a drift between Kurdish Muslims and Ezidis in the region. It is extremely disheartening that these individual videos attract a large audience.

The Kurdish-speaking ethno-religious community practices pre-date Islam, and are influenced by Assyrian traditions, and to a large extent Sufi/Shiite Islam. They practice one of the world’s oldest religions, and are often considered to be one of the most peaceful.

They are estimated to be around 500,000 in total, and often marry within their own groups, marrying outside is considered to be a punishable sin according to the Guardian.

Kurds have played their role throughout history in turning a blind eye and perpetuating false misconceptions and myths about the Ezidi faith. Their system of beliefs does not include hell, unlike Abrahamic religions. Although there are different explanations written about the constituents of the Ezidi faith.

For instance Sean Thomas argues that “Yazidism is a vastly ancient form of bird-worship, that could date back 6,000 years or more”. Having researched (briefly) on various authoritative websites, there is no doubt that just as various religions throughout history have been demonised, improperly presented, the Ezidi people face a similar fate.

It is important that relations between different religious groups in Kurdistan Region are rebuilt, and local religious “leaders” can play a pivotal role in establishing this. The Ezidi people have lost faith in their neighbours, and have suffered immensely. It will take years, perhaps decades for their sore wounds to heal.

And that is why it is crucial that these videos are disregarded, and greater scrutiny is placed on media outlets within Kurdistan that clearly show little concern of the consequences their posts perpetuate, and the hate they harbour.