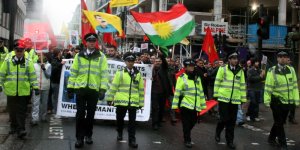 In Brazil for instance, direct citizen participation in policy-making has increased because of the emergence of protest groups, and other social movements. Political activism has changed the dynamics of the country — for better or worse is not the point here.

The Kurds in UK, although significant in number have been unable to influence government decisions and foreign policy. They have effectively failed to form lobby groups to participate in the democratic process of influencing the government on foreign policy issues.

The only efficient public campaign, which partially succeeded in influencing the government in UK was the Anfal recognition campaign. As a result, Anfal was recognised by the British parliament (note, not government due to possible legal liability in future). Other than that, the Kurdish political party representatives, and governmental institutions from the autonomous Kurdistan Region have not achieved milestones.

For many years Kurds — their language, culture and politics were not only marginalised but also alienated. In the past decade, marginalisation of Kurds has largely ceased, but lobby groups have not increased.

One of the obstacles towards forming and funding Kurdish lobby groups in UK has been the ongoing political disunity among different party representatives. Their lack of collective initiatives has held the entire British-Kurdish community back.